Am I Getting Too Old?

Lt and I went to a concert Thursday night. Rock and Roll at it's finest. We were jamming to flashback 80s with Kings X. Now, I love a good concert. In fact we have 5 already set up for the summer. But I was wondering if maybe I was getting too old for concerts.

See, we had to stand all night but found a prime spot close to the stage, against a wall. This spot was right beside the "aisle" so no one should be in front of us. Well. as the night went on, more people arrived and it became a battle for spots.

People started to stop in front of us and in the aisle. This caused major foot traffic jam with people pushing and shoving. To top it all off, the people behind us were so drunk! Thanks for them, Lt and I were showered with beer and Lt even had to grab the lit cigarette out of the guys hand (smoke free environment) and put it out!

Am I getting old because I am less tolerant? That the things in my past when I was younger is now the things that drive me insane? When I was younger, we would go to the concert, no ear plugs and push our way to the front. Now we wear ear plugs and we prefer seats to standing. Does this mean I am, gasp!, old? Or should I see it more as I get get older I get smarter? 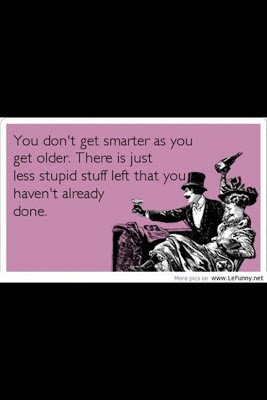