You have learned a little about my hometown of Spearville, Kansas here. Since my town is so small, we shall travel 25 miles west to the nearest town. Take your self back to the old wild west of Dodge City.


Dodge City is about 27, 000 people, definitely bigger than Spearville. It is the county seat of Ford County and was named after Fort Dodge. Dodge City was know as Cowboy Capitol and lawlessness which allowed Wyatt Earp and Bat Masterson to "clean up" the town. Dodge City is also know from the TV show Gunsmoke, with Matt Dillion and Miss Kitty.

Did you know it was first a movie with Errol Flynn and Olivia De Havilland? Did you also know the premier of the movie was in Dodge City, Kansas at the Dodge Theater in 1939? There was over
20, 000 people there, including the cast, for the premier. I mean, look at that crowd! I used to work at the Dodge Theater when I was in my 20s going to college. I am a big history nut (some would say just a nut) so I thought is was so fitting that I worked there!

Wyatt Earp and the boys patrolled the mean streets of Dodge City during the rough and tumble days of the old west, where cattle drives from all over headed to Dodge to sell their cattle. Front Street would have been Main Street back in the day. Unfortunately, where it is currently at is not the original location. Plus the buildings are reproductions. They still have shoot outs, stage coach rides and you can go to the saloon for entertainment with "Miss Kitty" and the saloon girls. 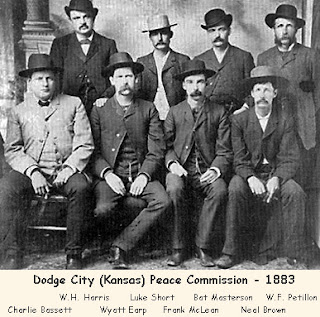 The last week of July through the first week of August is when the town celebrates Dodge City Days. During this time you can enjoy the week long rodeo. Also there are arts and crafts fair, a parade, a concert to kick the celebration off, street dances, and a medallion hunt (daily clues to help you find the medallion. If you find it and turn it in, you win $500). I drove up there every year to help my dad look for the medallion. Last year he was battling Hodgkins Lymphoma cancer (and won!) and was unable to go and look, but Daddy was able to decipher the clues. Alas, we did not find the medallion. Got the bejesus scared out of us with a snake though, but no medallion. 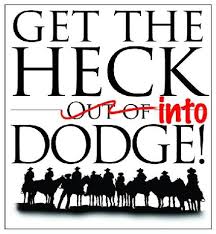 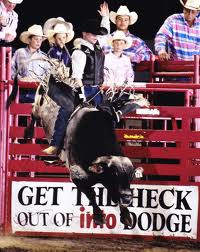 Dodge City Days would not be complete with out the Bull Bash! We always have to have a plate during DC Days. Oh man, I am getting hungry just thinking of those Calf Fries! You may know them as Mountain Oysters. Still wondering what they are? LT was a trooper and tried one but he won't eat them. That's ok...more for me!! 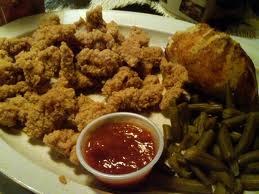 Outside of Dodge City you can still find Sante Fe Trail ruts. There is a sense of awe and even an eeriness to be out in the country standing in the spot where the Sante Fe Trail ran through. I still can't believe they have survived this long. Erosion is starting to take a toll though. I am glad I got to see them before they are completely gone. 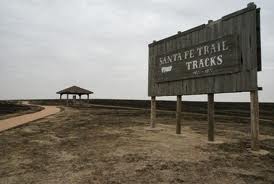 This is just a small portion of what Dodge City has to offer. Basically, I was whetting your imagination and travel bug about Dodge City. Thanks for stopping by and reading about my hometown. I also consider Dodge to be my hometown because if you weren't in Spearville, you were in Dodge. Ahhh the memories of cruising Earp. I'll have to save that for next time!

Oh and if you want to know what Calf Fries or Mountain Oysters are, just ask! I would love to share!